The January effect and investing in a new year

The so-called “January effect” is the idea that January is usually a good month for investing. First noted in 1942 by the investment banker, Sidney Wachtel, it wasn’t until the 1970s and 1980s that it really came to prominence, with a raft of academic research papers written attempting to analyse this apparent anomaly and why it may exist.

Explanations included tax management (the selling of loss-making shares just before the year-end to offset those losses against gains elsewhere, thereby lowering any capital gains tax liability - then buying these shares back in January, leading to a wave of buying pressure), “window dressing” (when professional money managers rebalance their portfolios away from stocks that would make them look bad when they report to clients, and replace them with ones that would make them look better), and investors starting a new year with renewed optimism.

But the academics were unable to pin-point exactly what may cause this pattern.

So what do the numbers say?

More recent analysis from Schroders shows that, in 85 of the past 130 years* (65%), the US stock market has risen in January. The figures are even higher elsewhere: January has been a positive month 71% of the time in the UK, 74% in Japan and 78% in Australia. 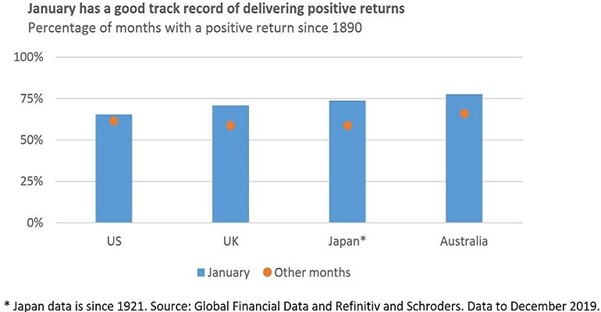 Duncan Lamont, head of research and analytics at Schroders, said: “Of course, the overall trend in the stock market over time is upward. So you’d expect decent odds that the return in any given month is positive. However, our analysis shows that January has finished up more frequently than other months.

“That said, a fairly accepted rule in life is that if something seems too good to be true, it probably is. An equally important rule when investing is that unless you can come up with a fundamental reason as to why something has been happening, there’s no reason to expect it will continue to happen in the future.”

While Schroders (and our) conclusion may be that investment adages should be taken with a pinch of salt, for a bit of fun and seasonal cheer, we thought we’d look at the funds that might benefit from some of those ‘grasping at straws’ explanations:

The companies whose share prices have suffered most this year have been in the COVID-impacted unloved areas of travel, leisure, retail, oil and gas. Despite a boost in November on the back of the vaccine news, many are still in negative territory. If these shares were sold in the short term their prices would likely fall further, but this could lead to good buying opportunities for contrarian investors such as those running Ninety One UK Special Situations or TM CRUX UK Special Situations funds – which would then benefit if the shares were then repurchased in January.

If you are looking for stocks that would make you look clever, look no further than the likes of Tesla and Zoom, whose shares prices are up some 600% and 500% this year respectively***. If other investors now buy their shares, prices could get an extra boost. Both are top ten holdings in Baillie Gifford American^. Tesla is also a top ten holding in Smith & Williamson Artificial Intelligence fund, along with other COVID beneficiaries, Ocado and Netflix^^.

If ever some renewed optimism was needed, it’s in the UK. Battered by Brexit and then COVID, UK companies are very much unloved by investors around the globe and, with dividends under pressure this year, UK equity income funds in particular have performed quite poorly. However, with the banks having been given permission to pay dividends in the new year, many other companies starting to reinstate their payments and a Brexit outcome, things could be looking up. Hindsight may prove January 2021 a good time to invest in the likes of Artemis Income and GAM UK Equity Income.

Past performance is not a reliable guide to future returns. You may not get back the amount originally invested, and tax rules can change over time. The views expressed are those of the author and do not constitute financial advice.